Homepage - Our Guru
Our Guru

Master Yu (Living Buddha Dechan Jueren) was born in an aristocratic family of Chinese medicine in Chaoyang City, Liaoning Province, in 1951. He grew up surrounded by ancient traditional Chinese medicine. Well-cultured in medical ethics, diligent in his studies, and intelligent by natural endowment, Master Yu had ascended through his independent thinking, quick reaction, superb wisdom, and his photographic memory. 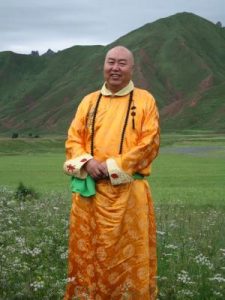 In the past, Yu Tian Jian studied carpentry, bench work, undertook such positions as squad leader, workshop director, factory director, general minister, and so on.

Under the guidance of a great master, Master Yu returned to Buddhism in 1989, and started to directly take part in spreading the primary thought of Buddhism and the simple methods of studying Buddhism. In 1989, he happily encountered Great Master Hui Ling, who was the current Dharma King and lineage bearer of the Hanmi Mystery School of Esoteric Buddhism in China at that time, and received all his training in the traditions, theory and thought of Hanmi Esoteric Buddhism, including all of his musical training and instruments.
Under the instruction of Master Hui Ling, Master Yu attained enlightenment, knowing everything in the past, present, and future. This new consciousness revealed to him that he must undertake a most noble mission. Resolutely, he resigned all of his positions, and has devoted his entire personal wealth to the great and selfless cause of expanding Buddha Dharma by teaching people how to recognize the true essence of Buddhism.

Living Buddha Dechan Jueren has endured extreme hardship, traveling across many mountains and rivers throughout China, south to the Yiangzhi River and to the Yellow River, in order to spread his words of enlightenment. He has left an indelible impression in more than twenty provinces and autonomous regions in that part of the world.
In order to exemplify his teachings, Living Buddha Dechan Jueren, while spreading Buddhism by way of the Hanmi esoteric mystery school, would cure patients of their life-threatening ailments, giving them new life and hope.

Now, Living Buddha Dechan Jueren, acknowledged as the preeminent authority and Dharma King of the Hanmi lineage of Chinese esoteric Buddhism, has expanded his mission by spreading his enlightened words throughout the modern world.