Hanmi is Chinese Esoteric Buddhism. The Buddhist masters assimilated the prevailing teaching of Confucianism and Taoism, and evolved the teaching into Hanmi, which was more easily understood by the Chinese people. Chinese Esoteric Buddhism predates the Tibetan Esoteric School, or Lamaism. Hanmi Buddhism, being forced underground for over twelve hundred years, is not as well known as Lamaism.

Hanmi Buddhism was established between 712 to 720 A.D. during the reign of emperor Tang Xuanzong (or Hsuan Tsung) by the Three Great Founders, Subhakarasimha, Vajrabodhi, and Amoghavajra. They came to the Daxing Shansi (Great Propagating Goodness Temple, the predecessor of Temple of the Great Enlightener — MahaVairocana) in today’s Xi’an City and translated many buddhistic sutras and tantras from Sanskrit to Chinese.
Subhakarasimha, an eminent Indian monk, translated the Vairocanabhi-sambodhi-tantra, or the Mahavairocana Sutra from Sanskrit to Chinese.
Vajrabodhi, a graduate of Nalanda Temple, received complete empowerment and transmission from Nagabodhi, who received from Nagarjuna.
Amoghavajra, a Singhalese, was the most famous Yogacharya of his time. He came at the age of 15 to China, where in 718 he became a disciple of Vajrabodhi, and later of Subhakarasimha. The Tang emperor granted dharma instruments to Amoghavajra who set up the first abhiseka-bodhi-mandala at Daxing Temple, thus founding Hanmi.
After Vajrabodhi’s death in 732, and at his wish, Amoghavajra went to India and Ceylon in search of esoteric or tantric writings, and returned in 746, when he baptized the emperor Xuanzong. He was especially noted
for rain-making and stilling storms. In 749 he received permission to return home, but was stopped by imperial orders when in the south of China. In 756 under emperor Suzong he was recalled to the capital. His time until 771 was spent translating and editing tantric books in 120 volumes, and the Yogachara rose to its peak of prosperity. He died greatly honored at 70 years of age, in 774, the twelfth year of Taizong, the third emperor under whom he had served. He was given the title of the Thesaurus of Wisdom, Amogha Tripikata and the posthumous rank and title of a Minister of State.
Historically, Chinese Esoteric Buddhism, or the Hanmi Mystery School, was thought to be lost when Emperor Tang Wuzong banned the teaching. Huiguo, the last known disciple of Amoghavajra, had left China and went with Kukai to Japan to establish the Japanese Esoteric school of Buddhism, later known as the Shingon sect. Unknown to history, Amoghavajra had another disciple, Huisu, who received all the religious instruments and dharma transmission. He then became the Dharma Lineage Bearer. Since then, Hanmi has been underground for over twelve centuries.
The Hanmi lineage has been passed on through one master per generation. Master Yu Tian Jian is the highest and only living master of Hanmi, the Honorable Abbot of the 1000-year old LongQuan Temple in Chifeng, Inner Mongolia, a doctor of Chinese medicine, and acknowledged as a Living Buddha in China.
Master Yu, from Chaoyang, Liaoning, at the age of 39, attained realization under the guidance of Grandmaster Huiling, the 48th Maha-Acharya of the Hanmi lineage. He sees the past, the present and the future, and understands his mission as a Hanmi successor. He resigned his position as a plant manager in China, and donated all his personal savings, over 1 million RMB, to the cause of reviving Buddha-dharma. He said,”I want to let people know the truth of Buddhism again.” He experienced all kinds of hardship as he journeyed through great rivers and mountains in order to transmit Dharma and to heal people. He has left indelible impressions everywhere.
In 1989, a discovery was made in the Heaven Chamber of the North Pagoda at Chaoyang City, Liaoning Province. They found sharira, or the bone relic of the Buddha, sutra and tantra engraved in silver plates in Chinese, two Chinese Stupas of the Diamond and the Womb Worlds, and the Stupa of Five-Buddha-Five-Wisdom. Later, a Hanmi mandala was also discovered in the Earth Chamber of Famen Temple (Famensi), or Dharma Doorway Temple at Fufeng County, Shaanxi Province. These discoveries predict the revival of Hanmi Buddhism.
Master Huiling found Master Yu on the 99th days after the discovery. Master Yu received complete empowerment and transmission, and became the Great Enlightener MahaVairocana Dharma King Dechan Jueren, the 49th Great Acharya. 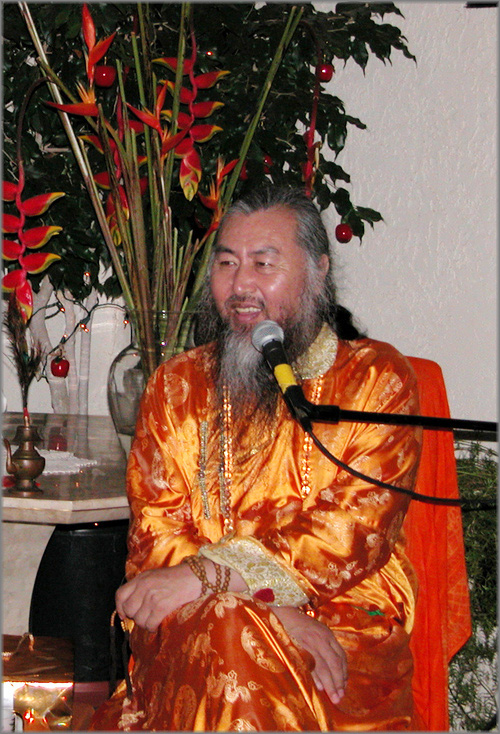